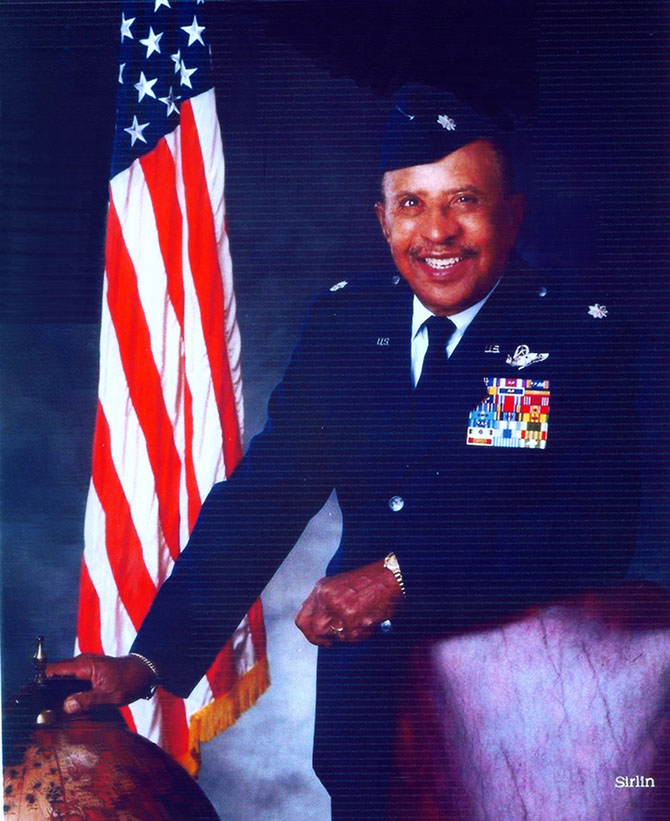 James C. “Jim” Warren began his military career as one of the original Tuskegee Airmen. He enlisted in the U.S. Army Air Forces on November 19, 1942 and retired with the grade of Lieutenant Colonel, thirty five years later, on November 1, 1978. He served in WW II with the 477th Bombardment Group. Jim flew over 173 combat missions in the Korean and Vietnam wars. He was awarded numerous medals for his service, including the Distinguished Flying Cross with two Oak Leaf Clusters (OLC’s are given in lieu of an award of the same medal), the Air Medal with eleven Oak Leaf Clusters, the Meritorious Service Medal with two Oak Leaf Clusters, the Air Force Commendation Medal and several other citations and awards.

His flying career of over 12,000 hours was highlighted by being selected as the navigator of “Homecoming One” (The “Hanoi Taxi”) the first C-141 to fly into Gia Lam AP, North Vietnam and return the first group of American POW’s to Clark Air Base in the Philippines, the “Apollo 14” recovery team, flying the Apollo crew from splashdown near Pago Pago, American Samoa to the Manned Space Center at Houston, Texas and the Bob Hope Christmas Show on parts of the southeast Asia Tour in December of 1964.

Jim graduated from University of Nebraska. He is a life member of the Kappa Alpha Psi Fraternity, the Tuskegee Airmen Incorporated, Experimental Aircraft Association (EAA), the Distinguished Flying Cross Society, Aircraft Owners and Pilots Association (AOPA) and The Solano Pilots Association. Lt Col. Warren is a Guinness World Record holder for being the oldest person (87) to earn a AFF initial Pilot license. Following his retirement from the Air Force he worked as a Personnel Executive for General Dynamics Corporation. Until his passing, he resided with his wife, Xanthia, in Vacaville, California. He is the author of the The Tuskegee Airmen Mutiny at Freeman Field.